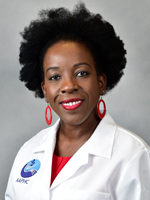 
Originally from Alabama, Dr. Ferguson returned to her southern roots in 2009 to join AAPHC. She also began her medical career at AAPHC in 1992 as a new residency graduate and NHSC scholar recipient. Dr. Ferguson completed her residency in internal medicine at Franklin Square Hospital Center in Baltimore, MD. She attended Howard University for her undergraduate degree as well as her medical degree graduating in 1989 as a physician. Dr. Ferguson is a Board Certified Internist and is a Fellow of the American College of Physicians.

After completing her NHSC service at AAPHC, Dr. Ferguson relocated to North Carolina for several years and practiced actively before joining the National Institute of Health in 2004 as a Medical Officer in Research. She began to miss the practice side of medicine though, and after thoughtful discussion with her family, she accepted a position with AAPHC – back where her career had begun! Dr. Ferguson still enjoys the research side of medicine and currently acts as the liaison for AAPHC specific to research studies. In the little free time she has available, Dr. Ferguson enjoys spending time with her daughters.