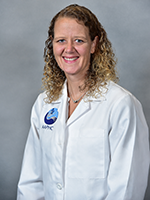 Danice Roberts, MD, FAAP is a 2007 graduate from the University of Illinois College of Medicine in Chicago IL. She completed her residency training in 2010 at Nationwide Chidlren's hospital/The Ohio State University. After 3 years of practicing outpatient pediatrics in her home state of IL, she moved to Southwest GA with her family in 2013 to join the Albany Pediatrics family and to escape the snow. When she is not at work she can be found trying to keep up with her children and enjoying the outdoors.